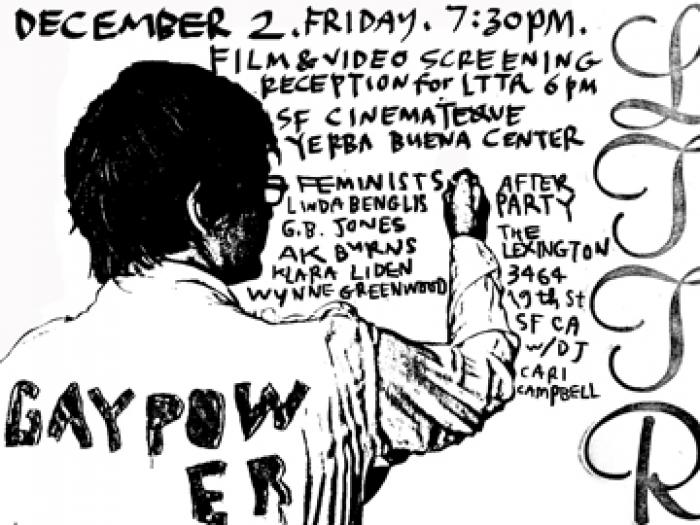 LTTR is pleased to present a program focused on artistic practice and performance at Outfest this year, bringing together herstorical tapes and recent pieces by contemporary artists. Sit back and look forward!

The Yoyo Gang (1992) G.B. Jones, S8 to video, color, sound, 30 minutes, Canada. Caroline Azar stars as Chills, the skateboard gang member who uses her powers of seduction to infiltrate the Yo-Yo Gang. Donna Dresch plays the Yo-Yo champ who leaves the gang after being slugged by Thrills. It’s about rival grrrl gangs and an urban queer youth existence with post-dubbed dialog and punk rock interludes.

Sometimes You Fight For The World, Sometimes You Fight For Yourself Pauline Boudry and Renate Lorenz, video, color, sound, 5 minutes, Germany(2004) Starring an androgynous duo miming the words to "Her Story" from the new-wave band Flying Lizards, this video references Jack Smith in a queer appropriation of gender and the exotic. It is set amongst the foliage of a 19th century botanical garden in a commentary on colonialism with it's obsession of the exotic, male/female coding and its focus on money and desire.

Working Portraits Maïa Cybelle Carpenter, 16mm, b&w, silent, 8 minutes, Canada/USA (2005) A document in the form of a portrait. Shot in June 2000 at Phil Hoffman's Independent Image-Making Workshop, this film stays close to the participants and the film medium itself as they work on their projects. With Becka Barker, Helen Hill, Deirdre Logue, Kelly Krotine, Alexis Rubenstein (1975-2002), and Karyn Sandlos. http://www.mccarpenter.net

Mock Rock Ulrike Müller, film to video, color, sound, 3 minutes USA (2004) A short film about the desire for solitude and independence and their impossibility, in which an outcropping of rock in an industrial zone in Queens, New York, mirrors the social experience of loneliness in the cultural conditionality of nature.

550 Jamaica Ave. Klara Liden, video, color, sound, 5 minutes, USA (2002) In an abandoned apartment in Brooklyn, Liden sings and plays the piano. Who lived here? A man? A woman? It makes sense that when we briefly see the artist, or at least her bare back, bent over the keyboard, and again as she rides an exercise bike, her gender is unclear.

Searching For The Fourth River, Fereshteh Toosi, video, color, sound, 2 minutes, USA (2003) This short piece is an actual news segment documenting this performance-intervention with Carolyn Lambert. Developed as an opportunity for dialogue about Pittsburgh's geography and the city’s collective identity, “Searching for the Fourth River” was constructed around the fictional premise of two private investigators and the public interest group that hired them to search for Pittsburgh’s legendary, underground fourth river.

Strangers Carola Dertnig, video, color, sound, 3 minutes, Austria (2003) In Strangers, on her way through the lobby of a train station, a woman loses, in public, the pantyhose that she had left in her pants the day before. Dertnig quotes an excerpt from the sketch Die Fremden (”The Strangers”) by Liesl Karlstadt and Karl Valentin (1940): a monologue about the relationship of the term “stranger” and “being foreign,” as well as the question of what happens when a stranger is no longer strange.

New Report Wynne Greenwood and K8 Hardy, video, color, 12 minutes, USA (2005) A newscast from the feminist TV news station, "WKRH - Pregnant with Information." As Henry Irigaray (Hardy) and Henry Stein-Acker-Hill (Greenwood), the artists stage reports on subjects that might not otherwise be considered newsworthy, including their friends, their bodies, their anxiety, the closing of a feminist bookstore, random acts of dancing, and an evening bath. These "breaking reports" are broadcast live to the newsroom for comment, and then out to their studio audience. While exploring the nature of news as we know it, its parameters and its packaging, New Report delves into underrepresented spaces, crises and histories.
This film/video program was screened at MIX NYC, Outfest 2005, the San Francisco Cinemateque, and the London Lesbian and Gay Film Festival
film/video