the Dead, Absent, and Fictitous 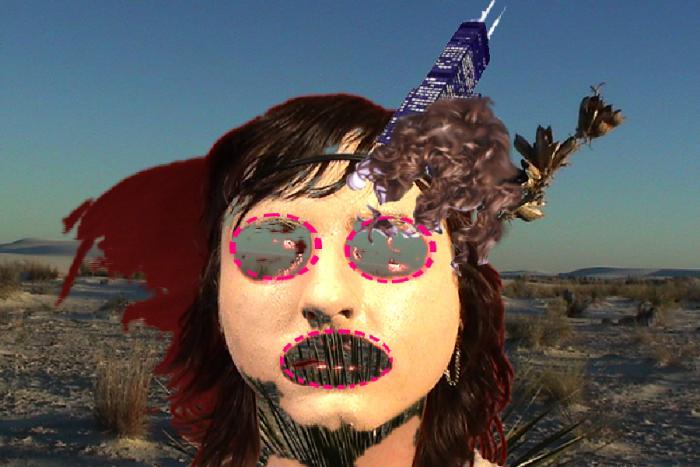 THE DEAD, THE ABSENT AND FICTITIOUS Presented by LTTR, 2006

This is our recognition of all things un-see-able. Is it in your mind, in your blood? Is it your dream or deep evil? Is it your grandma or your hero's unfinished last work? You paint wide with your camera and think big. The point is that it doesn't have to be new. Does it make sense? Or state the absence of it?

Marble Mouth Au Revoir, Curtis Carman 2006 1:38 USA It's a marble bust of everything i wanted to say to you my love, before you were gone.

Dead In The Desert, Marriage (Math Bass and James Pei-Mun Tsang) 2006 03:33 USA History collapses in this operatic fantasy of failed utopias and the new queer dawn.

The Last Day of November, Bill Basquin 2001 16mm 4 minutes b/w. USA synopsis: ....a gestural study of a family of deer hunters as they move from the field to the barn.

21 YEARS, Moyra Davey 2005 1 min USA 21 Years: a miniscule totem to scribbling, shot on the last remaining roll of outdated Kodachrome in the door of the fridge.

Social Movement, Emily Roysdon 2005 7 min 24 sec. USA The project attempts to simultaneously create and perform the stage. to frame performance and memory through slow repetitious gestures. Constantly preparing the document of our presence, and the monument of our persistence.

Munchausen, Susanne Oberbeck 2006, 2:59", UK In the music video for No Bra's "Munchausen" two compulsive men i mean liars are trying to outdo each other in a sexually charged pissing contest.

Lez Side Story, Hedia Maron and Faye Driscoll 2006, rt 11 minutes, USA Female gangs battle for turf when a forbidden love gets in the way. Taking self-love, hate and fate to a new level, Lez Side Story is a queer take on a legendary tale.

Spektro De’l Tempo, Ilona Berger 2005 2 minutes USA In 1974 the filmaker's mother left Moscow for sunny California where she died soon afterwards, leaving scant primary documents. A tape of her interview with a Soviet director, the conjurings of a grandmother, and the Esparantist cousin from Odessa at his most spectral, are fragments from this story. The neutral intermediaries of monuments and other statuary, ex lovers and other people’s grandparents gallantly fill the gaps. Spektro De’l Tempo is cartography rendered in flypaper, memory held in the sweet glue of revisionist history, and a nod to families real and invented.

LOVE/TORTURE, Ulrike Mueller 1995, 6 Min, MiniDV, USA LOVE/TORTURE performs a text about pain and pleasure proposing for viewers to identify with the role of the perpetrator rather than the victim.

fat/soft/normal/skinny, Dafne Boggeri 2005, rt 2'14'', Italy body is shaking, mixing contents and codes of communication to invent new linguistic solutions... sound produced by two metal spheres in an almost empty 400ml spray paint can
This film/video program has been screened at Documenta 12, Yerba Buena Center for the Arts exhibition "The Way That We Rhyme",Mix NYC, Outfest 2006, and the Govett-Brewster Art Gallery in New Plymouth, New Zealand
film/video